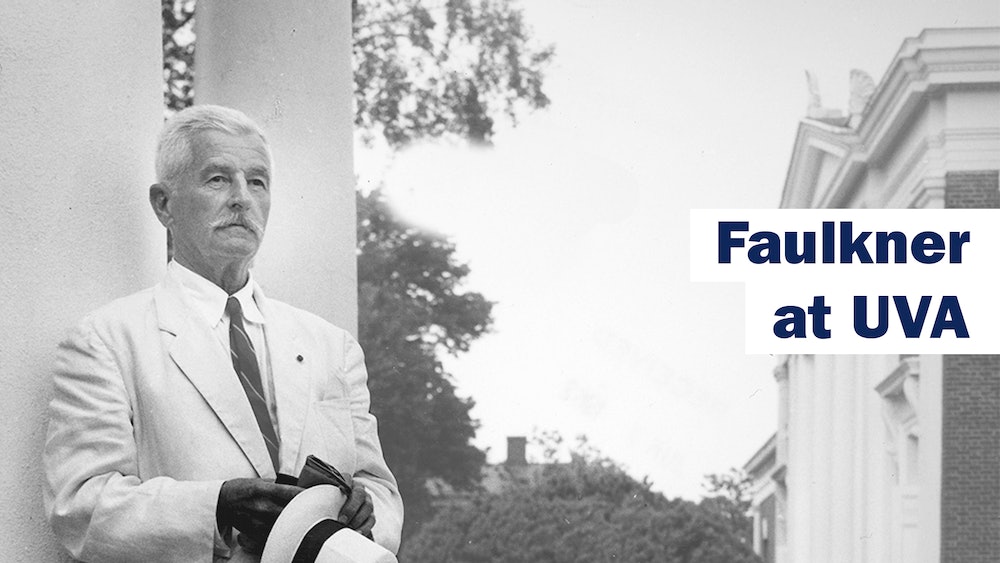 How did Faulkner, so deeply associated with Mississippi, become a fixture at the University of Virginia? After daughter Jill moved here in 1954, he and Estelle began visiting, and the birth of their first grandchild increased the appeal. In spring 1956, UVA English faculty members Fred Gwynn and Floyd Stovall met with the famous visitor and invited him to be the first Balch Writer-in-Residence; Faulkner accepted. He needed a home away from Oxford, a place so deeply associated with the writer and his books that he felt oppressed there by fame.

Faulkner found his niches—his office hours, UVA sporting events, and most pleasurably for him, the stables and countryside. He remained at the University until he died unexpectedly, on one of his regular trips back to Oxford. At the time, he was in the early stages of purchasing a home west of Charlottesville.

Tour the historic Grounds of the University of Virginia along with William Faulkner from February 1957 through May 1958, following his footsteps from his office in New Cabell Hall where he kept office hours and wrote to his visits to English classes, his public speaking engagements and readings for local citizens and women's groups in Rouss Hall and Clark Hall, and two formal addresses.

To learn more about Faulkner's time at UVA, also visit Faulkner at Virginia: An Audio Archive, written and directed by Steven Railton in collaboration with the University of Virginia Library.